What is a liver lobectomy?

Liver lobectomy refers to removal of a liver lobe.  In dogs and cats, the liver is made up of six separate lobes.  Beginning from the left side of the abdomen, these include the left lateral lobe, left medial lobe, quadrate lobe, right medial lobe, right lateral lobe, and caudate lobe.  Surgical removal of large liver tumors often requires concurrent removal of a substantial amount of normal liver tissue.  Thankfully the healthy liver tissue has a strong regenerative capacity and removal of 65% – 70% of the total liver volume can be performed without significant consequence.  Liver regeneration begins within hours after liver lobectomy and may last up to 6 – 10 weeks. Shaved abdomen of a dog with a very large liver mass, prior to undergoing surgery.

Why is a liver lobectomy performed?

The most common reason to perform a liver lobectomy is to remove a mass that has been diagnosed within the liver.  Masses found within the liver may be benign, malignant, or may represent metastasis (spread) from a tumor located elsewhere. What are the most common types of liver masses in dogs and cats?

Approximately 30% of canine hepatocellular tumors are benign adenomas. They are most often diagnosed incidentally but can grow to be quite large.  These masses can be difficult to differentiate from massive hepatocellular carcinomas without evaluation of the tissue microscopically.  When associated with symptoms from their growth within the abdomen, surgical removal of these benign masses is considered to be the treatment of choice.

In cats, bile duct tumors are the most commonly diagnosed liver masses.  Benign masses (bile duct adenomas or biliary cyst adenomas) are seen twice as frequently as malignant tumors (bile duct carcinomas). The prognosis for bile duct adenomas after surgical removal is thought to be very good.  Sadly, the prognosis for malignant biliary tumors in cats is quite poor.  Metastases are frequently (~65%) seen and a mortality rate of 100% in the perioperative period has been reported. Intraoperative picture of a liver mass effacing (taking over) the normal liver architecture.

The liver is a common site for metastasis of cancer from other bodily organs.  Lymphoma is the most common tumor seen to spread to the liver, followed by carcinomas.  The prognosis for metastatic liver masses is generally very poor.

What are some signs that my pet may have a liver tumor?

Liver tumors are more commonly seen in older pets.  Clinical signs can be vague, but may include vomiting, lethargy, anorexia, or weight loss.  In more severe cases, your veterinarian may be able to feel the mass is in the abdomen, there may be free fluid within the abdomen causing a distended appearance, or your pet may be jaundiced (have a yellow-tinged appearance to the skin, eyes, or gums). 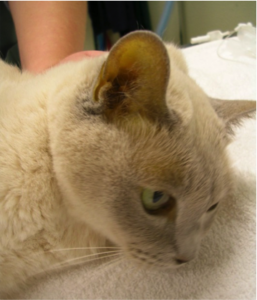 Jaundice (icterus) in a cat. Note the yellow tinge to the inner ear and above the eye.

How is a liver tumor diagnosed?

Often the first abnormality noticed is elevations of liver enzymes (ALKP, ALT, GGT, AST) on routine screening bloodwork.  This finding often prompts evaluation with further imaging, including abdominal radiographs (x-rays) or ultrasound.  On abdominal radiographs, a liver mass is often seen as a mass in the front of the abdomen which displaces the surrounding organs.

Abdominal ultrasound can be very helpful, and may allow determination of which liver lobe or lobes are affected, the approximate size of the mass lesion, and proximity of the mass to other important vital structures, including the gall bladder and the vena cava (large vein in the abdomen that lies close to the liver).

Diagnosis of tumor type can be challenging without surgical intervention.  Ultrasound-guided aspirates (using a needle to try to obtain cells from a tumor) can be performed but yield an accurate diagnosis in only 14% – 50% of dogs and in 33% of cats when compared to evaluation of tissue (biopsy or histopathology). Some tumor types, such as lymphoma, are generally readily identified by fine needle aspirate and respond well to chemotherapy; surgery is not recommended with lymphoma.

Thoracic radiographs (chest x-rays) and complete blood work should be performed in any pet diagnosed with a liver mass. A CT scan may be recommended to better evaluate the resectability of (ability to safely remove) a liver mass from its size and location, as well as to evaluate for the presence of metastatic disease. CT scan: The larger arrow indicates a mass in the right medial liver lobe. The smaller arrow is denoting the location of the caudal vena cava. How do you treat tumors of the liver?

Some liver masses cannot be removed in their entirety without high risk of bleeding (hemorrhage) at surgery or compromise to other organ systems.  In these situations the surgeon will either attempt to remove as much of the liver mass as can be done safely or will instead elect to collect a biopsy of the liver (histopathology) to determine if further treatment is necessary. After removal, the abnormal tissue is submitted for tissue evaluation. Thoracoscopy is a minimally invasive technique that allows our surgeons to visualize the chest cavity without the need to separate the ribs. Procedures that can be performed thoracoscopically include lung biopsy, partial lung lobectomy, pericardal window and subtotal pericardiectomy.  If the surgery is performed minimally invasively the patient may be able to go home the same day with a significantly smaller incision, and should experience a quicker return to normal function post surgery.

What can I expect after surgery?

Generally your pet will remain in hospital monitored closely in the ICU for between 36 – 48 hours following liver lobectomy.  The red blood cell volume is monitored following surgery to ensure that no postoperative hemorrhage occurs.  Injectable pain medications are administered until the morning of anticipated discharge from the hospital to make certain your pet is comfortable.

Following discharge from the hospital, exercise restriction is recommended for 10-14 days.  During that period of time no running, jumping, or rough-housing activity should be allowed.  A recheck examination with your surgeon is recommended two weeks following discharge from the hospital to ensure the abdominal incision is healed prior to return to full activity.  Biopsy results are generally available 5 – 7 days following submission of the sample.  The surgeon will contact you with further information and recommendations when the results are received.